Learn how to evaluate your results using the project estimate report

There is a type of report that helps you measure the estimated hours for your project. With it, the information visibility is even clearer for the manager. Therefore, this report is also very useful for agencies that have hourly contracts with their clients.

The way to access the report is through Reports > Estimates > By Project. Click on the search and select the project you want. Once the research is done, iClips will give you the data in a table that shows the variations between estimated and realized, detailing the planning and execution of the hours of each employee involved.

It is worth mentioning that the positive variations for the agency appear in blue and the negative ones are in red. For example, the estimate of extra expenses + investments + third party costs, along with the estimated value of the proposal for this project. 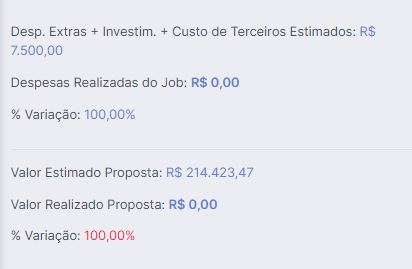 In the second part of the screen, you will see the details of the estimated and realized numbers for the items "Internal cost", "Media", "Digital media", "Budgets" and "Events".

It is possible to print the report in PDF or generate an Excel version using the "Printer" or "Excel" icons.

Did you see how easy it is to have an even more detailed follow-up than you estimated for a given project? With iClips you have all that control!


Did you find your answer?